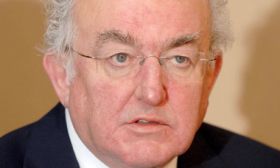 – Ethics in Politics and Finance

Ethics in Politics and Finance – Individuals as Agents for Change

Lord Brian Griffiths is vice chairman of Goldman Sachs International and chairman of the European Middle East and Africa Business Practice and Compliance Committee. He taught at the London School of Economics from 1965-76, was appointed professor of Banking and International Finance at the City University in 1976 and was Dean of the City University Business School from 1982 to 1985. He became director of the Bank of England in 1983 for two years and from 1985 to 1990 served as Head of the Prime Minister’s Policy Unit. In his role as special Advisor to Margaret Thatcher he was responsible for domestic policy-making and was one of the chief architects of the Government‘s privatisation and deregulation programmes. He is currently a member of the Select Committee on Economic Affairs and was chairman of the Archbishop of Canterbury’s Lambeth Fund. He is also chairman of Christian Responsibility in Public Af fairs and has written extensively and lectures on ethics and business.